Lami Phillips took to Twitter and Instagram to talk about people living above their means just to create an "illusion". She added that people shouldn't believe everything they see on social media because it's like a "mirage" She tweeted: "Some people are BROKE!some have to borrow to […]

Tacha shares screenshot of where her team begged Skiibii for help when she was in BBNaija, drags him now.

Controversial reality star, Tacha, has sent a subtle shade at Singer, Skibii after the latter seemingly asked the former for help. Apparently, Tacha’s team had sought help from the singer who was riding on a renewed fame at the time ; Tacha needed help as […]

South African dancer, Zodwa Wabantu goes pantless as she bends to clean her house with her naked backside facing the camera (photos)

Zodwa Wabantu risked exposing too much as she bent to clean her house while wearing only a t-shirt and no underwear. The South African dancer had her naked butt facing the camera as she cleaned her house in a video shared to Instagram. Below are screenshots from […] 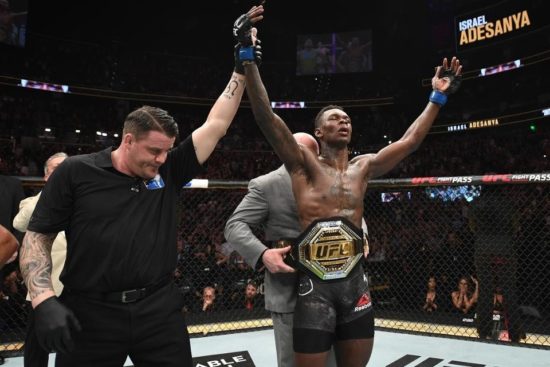 The Nigerian-born fighter achieved this latest feat in spectacular fashion at UFC 243 in Melbourne, Australia.

The 30-year old has now extended his perfect professional record to 18-0.

To emerge victoriously, Adesanya landed a right hook which floored Whittaker in the final seconds of the first round and ended the fight in the second of the five-round contest with a left hook.

In all, it took Adesanya 3 minutes 35 seconds to capture the undisputed UFC middleweight title in front of nearly 60,000 fans at Marvel Stadium.

As reported by the BBC, Whittaker started out throwing a host of power shots but Adesanya was loose and slick on his feet in the opening round, and delivered a stunning right hand in the final seconds that sent Whittaker crashing to the canvas as the buzzer saved the champion from a first-round defeat.

A similar counter right hook from Adesanya found its mark early in the second round as the interim champion began to turn on the heat, but a powerful left from the defending champion showed the challenger would have to be on his guard against Whittaker’s power.

And, as the pair started to trade big shots in the middle of the octagon, Adesanya planted his feet and answered a straight right from Whittaker with a stunning right-left combination to send him down, with referee Marc Goddard stepping in to spare the Australian further punishment as the Kiwi moved in to apply the finishing touches on the ground.

A former kickboxing star, Adesanya exploded onto the global MMA scene only last year after arriving in the UFC with an undefeated 11-0 record.

“I was in the nosebleeds,” Adesanya told UFC commentator Jon Anik in his post-fight interview. “Now I made his nose bleed.

Adesanya’s first test as undisputed middleweight champion looks set to come against Brazilian contender, Paulo Costa, who was a prominent figure at cageside on fight night.

It will take a miracle for Coronavirus to disappear- Pastor Adeboye

Pastor Enoch Adeboye, the General Overseer of the Redeemed Christian Church of God RCCG, says it will take a miracle for the Coronavirus pandemic to disappear. Adeboye said this while preaching via Dove TV this morning. According to the clergyman, the pandemic would not disappear completely but […]

The phishing campaign, as detailed by Microsoft’s Security Intelligence team via Twitter, has been circulating since at least May 12th and comes with a Covid-19 lure to bait users into opening the email and accompanying attachment. Source link No related posts.

Lami Phillips took to Twitter and Instagram to talk about people living above their means just to create an "illusion". She added that people shouldn't believe everything they see on social media because it's like a "mirage" She tweeted: "Some people are BROKE!some have to borrow to […]