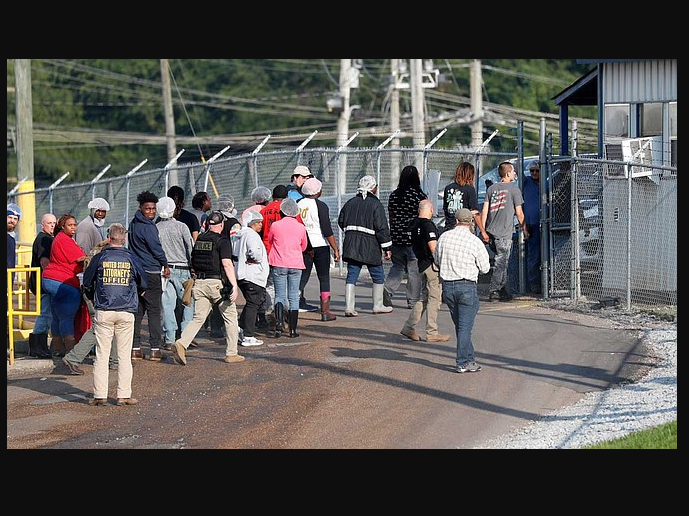 The US Immigration and Customs Enforcement have released nearly half of the 680 immigrants who were arrested in a massive raid in Mississippi on Wednesday, August 7, 2019. The 680 were initially arrested at several food-processing plants in Mississippi for allegedly not having proper documentation to be in the US. The arrested workers were transported to a local Mississippi National Guard hangar where they were all questioned about their immigration status and if they had deportation orders. Confirming the release of 300 immigrants, ICE spokesman Bryan Cox told the BBC on Thursday, August 9, that those who were not released will be moved to an ICE detention facility and held there. "The 300 released are released from custody," he said in an emailed statement. "They were placed into proceedings before the federal immigration courts and will have their day in court at a later date." Mr. Cox also revealed that those arrested were asked if they had any dependents needing care or if they had any children at school who needed to be picked up. They were given access to phones at the processing site to make arrangements to care for their children. He said those with childcare issues are "expeditiously processed and returned". In response to critics who called the raids cruel and harmful to the workers' children, Mr. Cox said "This agency took extensive steps in planning for this operation to take special care of situations involving adults who may have childcare situations or children at school at the time of their arrest." Back in June, President Donald Trump had tweeted ICE’s plans to conduct nationwide raids to arrest and deport “thousands” of undocumented immigrants.The post Update: US Immigration release nearly half of the 680 arrested immigrants in Mississipi raids appeared first on Linda Ikeji Blog.