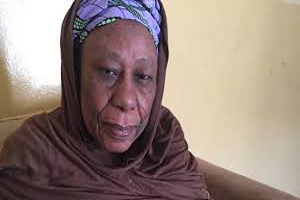 Hajiya Jummai Abubakar Tafawa Balewa, the only surviving wife of first Prime Minister, late Sir Abubakar Tafawa Balewa, has died. Hajia Jummai died of cardiac arrest in Lagos yesterday October 27th, days after she returned to Nigeria from India where she had gone to seek medical care for a heart-related ailment. President Buhari has condoled with the family of Hajia Jummai as well as the government and people of Bauchi state. In a statement signed by his Senior Special Assistant on Media and Publicity, Garba Shehu, President Buhari prayed for the repose of her soul. “It was with the deepest sense of sorrow that I have learnt of the tragic demise of Hajiya Jummai Tafawa Balewa. In her sad demise, Nigeria has lost an outstanding political figure, who was passionately committed to the cause of the family and the legacies of her late husband.I convey my heartfelt condolences to members of the bereaved family, the government and people of Bauchi State and the entire people of our dear country. May Allah repose her soul.” Meanwhile President Buhari has directed the Secretary to the Government of the Federation, Boss Mustapha, to make an aircraft from the Presidential fleet available for the evacuation of the remains of the late Prime Minister’s wife from Lagos where she died in a private hospital, to Bauchi where her burial events will take place tomorrow, Monday October 28th.The post Wife of late Prime Minister, Tafawa-Balewa, dies at 85 appeared first on Linda Ikeji Blog.