Glee Hotel has debunked the rape allegation against popular Nigerian musician known as Dbanj. Glee Hotel issued a statement after a talent/model scout, Benjamin Ese, alleged that Dbanj raped his friend two years ago. Not disclosing the friend’s name, Ese wrote that his friend had […] 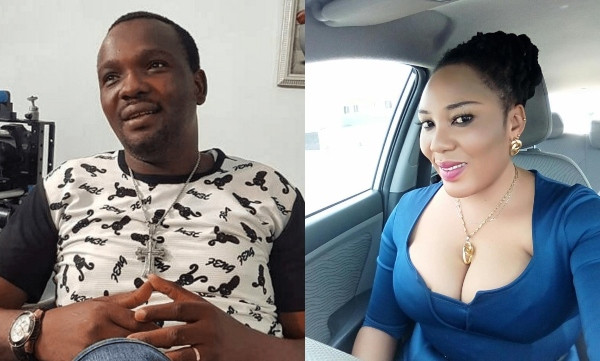 Barely 24 hours after announcing that he bought a new car from profits made from sales of his new movie, Yomi Fabiyi has again denied demanding for sex in exchange for a movie role.  Recall that one Eunice Omoshalewa Eniola who claimed to be an upcoming actress, in 2017 accused the actor and filmmaker of demanding sex from her in exchange for a movie role. She claimed that the incident occurred 9 years earlier before she went public with the allegation.  Taking a walk back memory lane as he recounted his ordeal at that time, Yomi Fabiyi insisted that he never met the upcoming actress turned realtor until 2017. He further alleged that the lady was used by some actresses to tarnish his image.  Also recalling how he abadoned the publicity for his movie that was released when the allegation was made and spending over a million to get justice, Yomi disclosed that these unmentioned actresses used their connections to shield Eunice from facing prosecution.  He wrote;  THIS IS ANOTHER EVIL, THROW BACK 2017.First and foremost, I have never met this lady EUNICE OMOSHALEWA ENIOLA before in my life until that 2017. This is how wicked and evil some artists can be in their quest to bring anybody down. Sexual Harassment is peculiar to the industry and it was easy for them. This story still seat with my name online. Every week as an artist you google search your name and evil like this pops up. Even if you choose to FORGIVE the perpetrators, you can never FORGET. If not for God and my plain heart, this is enough to sink my ship. I abadoned the publicity for my movie AGBEDE MEJI then which just came out and doing well to save my name. I spent a million plus trying to get justice. What did these actresses do, they spent a lot, use their connect to shield the lady from facing prosecution. For using a new act instead of her and a post on IG are my sins for this. Even though using the new girl is what I regret till date(talk dey later).This lady EUNICE OMOSHALEWA ENIOLA is a clear case of FANS who go recckless and allowed her used for evil. The moment an artist start grooming menace online in the name of fans on social media and allow them some access & affection just to run dirty errands online, that is a tickling time bomb. But trust me, this is part of what will ruin them. They used someone in the seat of power(I know the GRAVE will deal with that one completely before moving to the real criminals except they confess and seek forgiveness).They tried use this celeb POLICE WOMAN. Despite all evidence available to them in Zone 2, she refused to prosecute the lady. All I hear is let them settle it Yomi. The next is Yomi if we didnt charge her to court, charge her on civil grounds. I did charge her to court. She was avoiding service from the court & being served police invitation. I went to her scripted police invitation, she ran away from mine that started before her. These actresses used fake tears and lies to draw sympathy that shielded this lady.I rant on these things not because I derive pleasure, I do so people can know my stand point. These are not celebrity gists but PURE EVIL. I don't subscribe to this kind of industry. 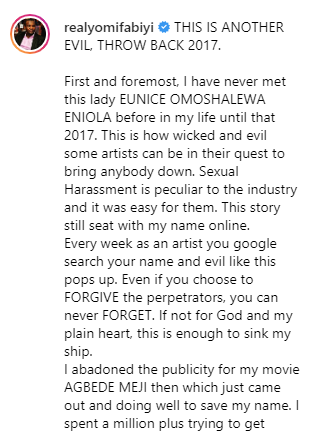